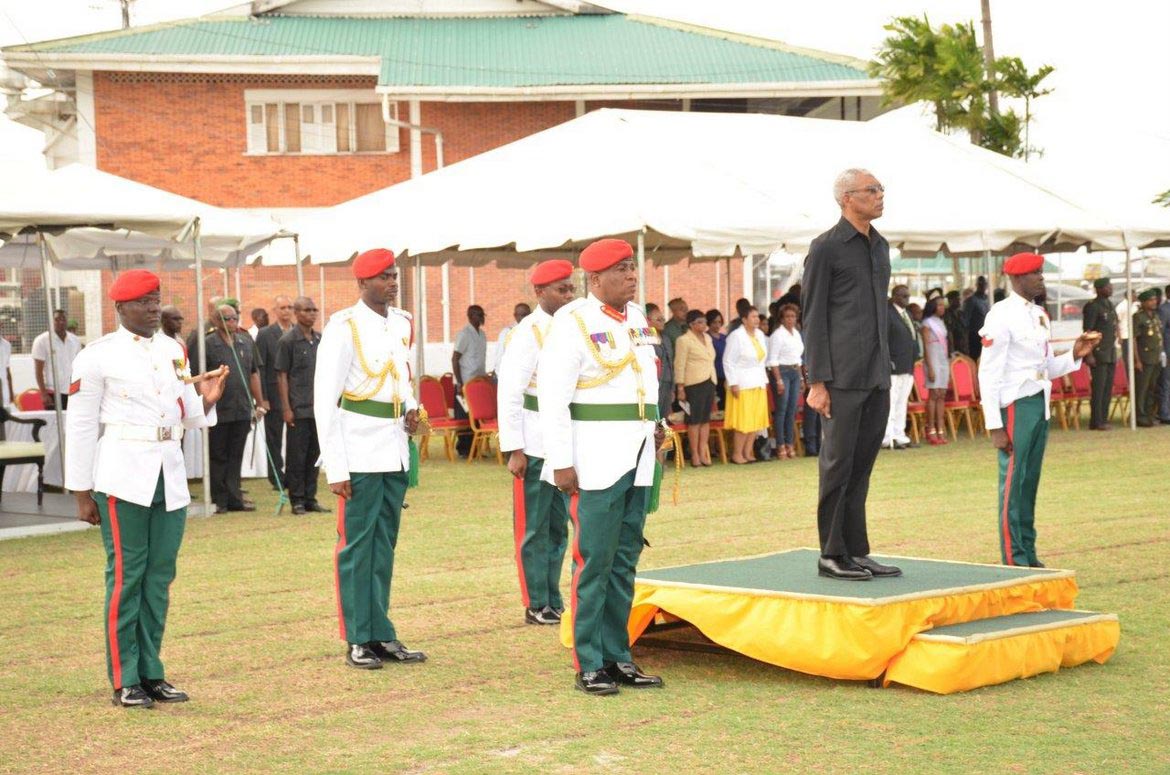 Georgetown, Guyana – (November 18, 2015) Celebrations for the Guyana Defence Force’s (GDF) 50th anniversary continued today with His Excellency, President David Granger taking the Presidential salute at the Consecration and Trooping of the Colours ceremony. The event was hosted at the army’s Playfield at Base Camp Ayanganna and saw several members of the diplomatic community in attendance.

President Granger took the Presidential Salute after inspecting the five Units, who participated in the ceremony to consecrate and display the Colours associated with each of those Units. The Units included Base Camp Ayanganna, Guard No. 2, Base Camp Stephenson, One Infantry Battalion, Two Infantry Battalion and the Engineers Battalion. During the ceremony the Consecration of the Colours was done through prayers by representatives from the three main religions in Guyana, Christian, Hindu and Muslim. The Hindu prayer was done by Pandit Dhanesh Prashad, the Muslim by Brother Asheel Khan, while the Christian prayer was done by Force Chaplin Pastor George Jeffers.

President David Granger and Chief of Staff, Mark Phillips as they witnessed the the marching off of the Colours during the parade.

Trooping the ‘Colours”; is a ceremony involving parading the Colours which identifies the Units, developed initially as a means of ensuring that each soldier knew the colour of his unit and could therefore rally in battle. However, Colours are no longer carried into battle in response to the changing circumstances of war. Nonetheless they remain the symbols of the spirits of the regiments, and the ceremonial tradition associated with them has been preserved.

From the earliest times men have carried into battle some token to serve as identification and a rallying point in the field. However, in England during a period of conflict with Spain, Commanders of regiments, who were not noblemen and who therefore had no Coat of Arms, used tokens of various colours to identify their particular commands. These token took the shape of flags and became known as ‘Colours’. 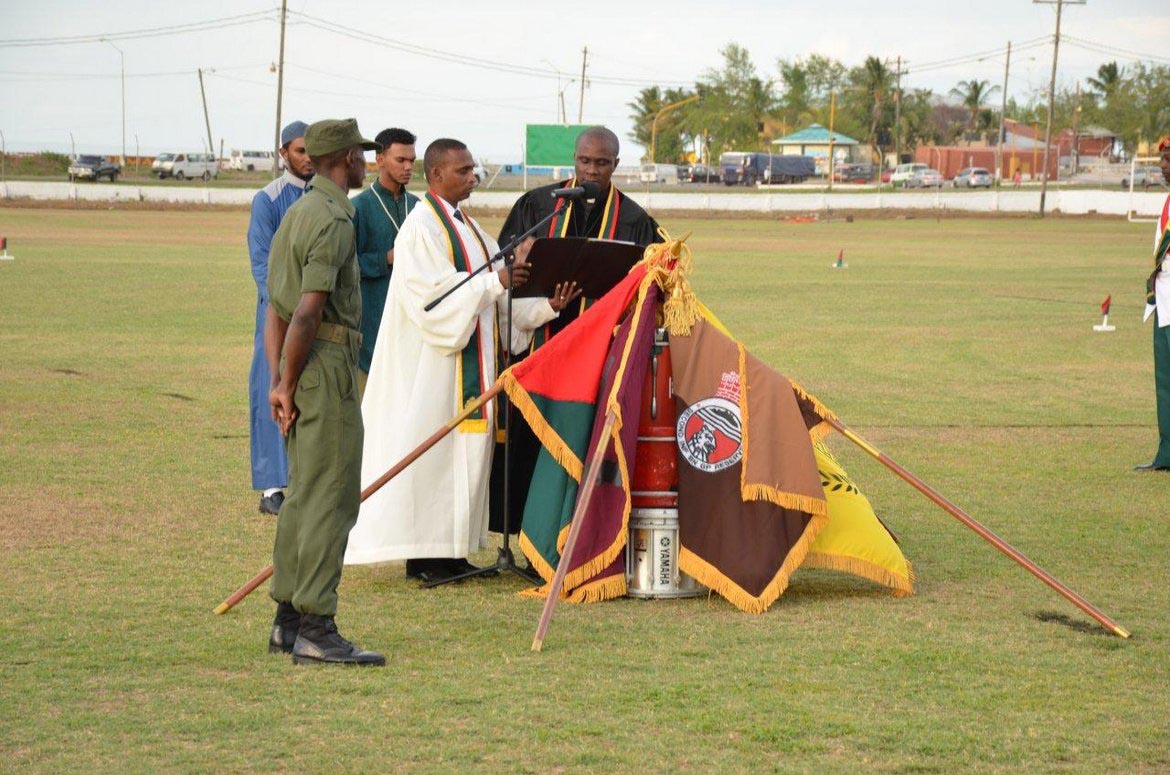 Over time the Colours became the symbol of the embodiment of the spirit of the men who fought under them. Battle-honours earned by those men were placed upon them. The practice of consecrating the Colours developed and they were accorded the highest military honours.

The event was well attended by not only military persons but there was also a large turnout of civilians who all seemed eager to get a glimpse of the precise and calculated paraden of the Colours. Other dignitaries who attended the event included, past Chief of Staff, Edward Collins and Michael Atherly, British High Commissioner to Guyana, His Excellency Greg Quinn, Mexico Ambassador to Guyana, His Excellency Ivan Robero Sierra Medel. Also present were members of the Ex GDF-Association of New York and Toronto and members of the Guyana Legions.

The ranks who participated in the ceremony were cheered on by their colleagues and other onlookers, who gave their nod of approval for the excellent display. 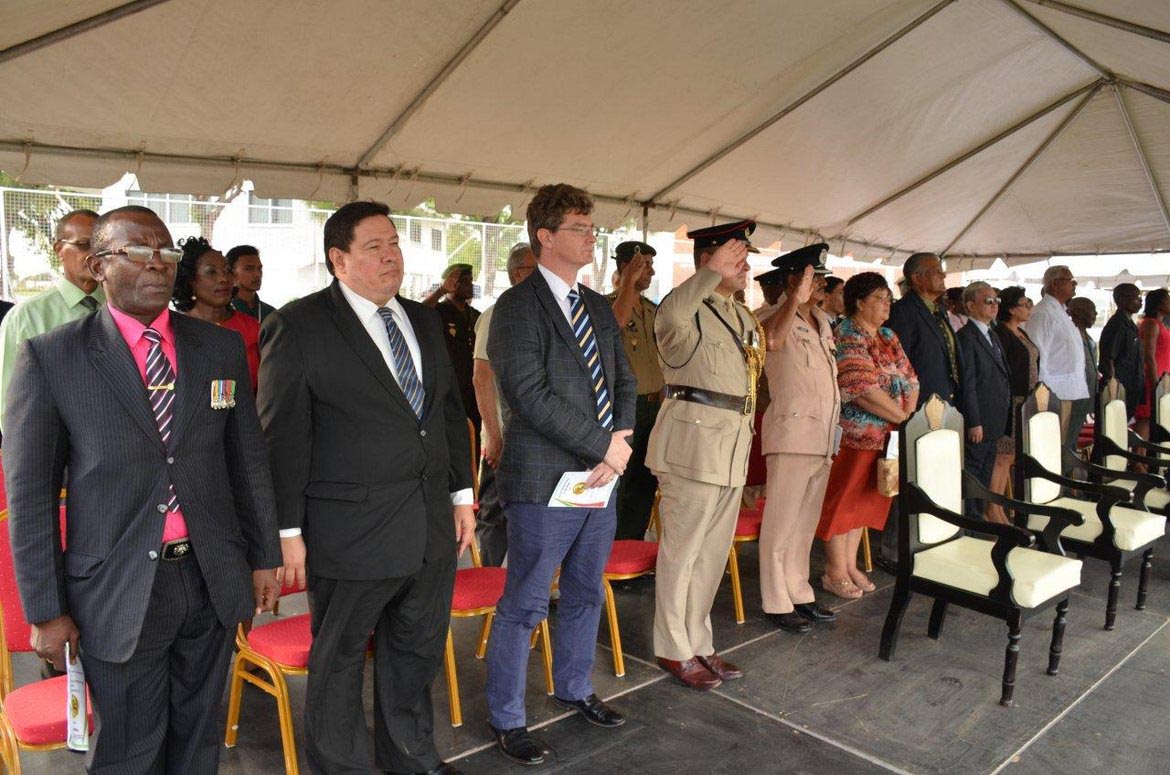 From left, Former Army Chief of Staff, Edward Collins, Mexico’s Ambassador to Guyana, His Excellency Ivan Robero Sierra Medel, British High Commissioner Greg Quinn were among some of the dignitaries who attended the auspicious event

No Decision Made By Department of Natural Resources & Environment On Baishanlin