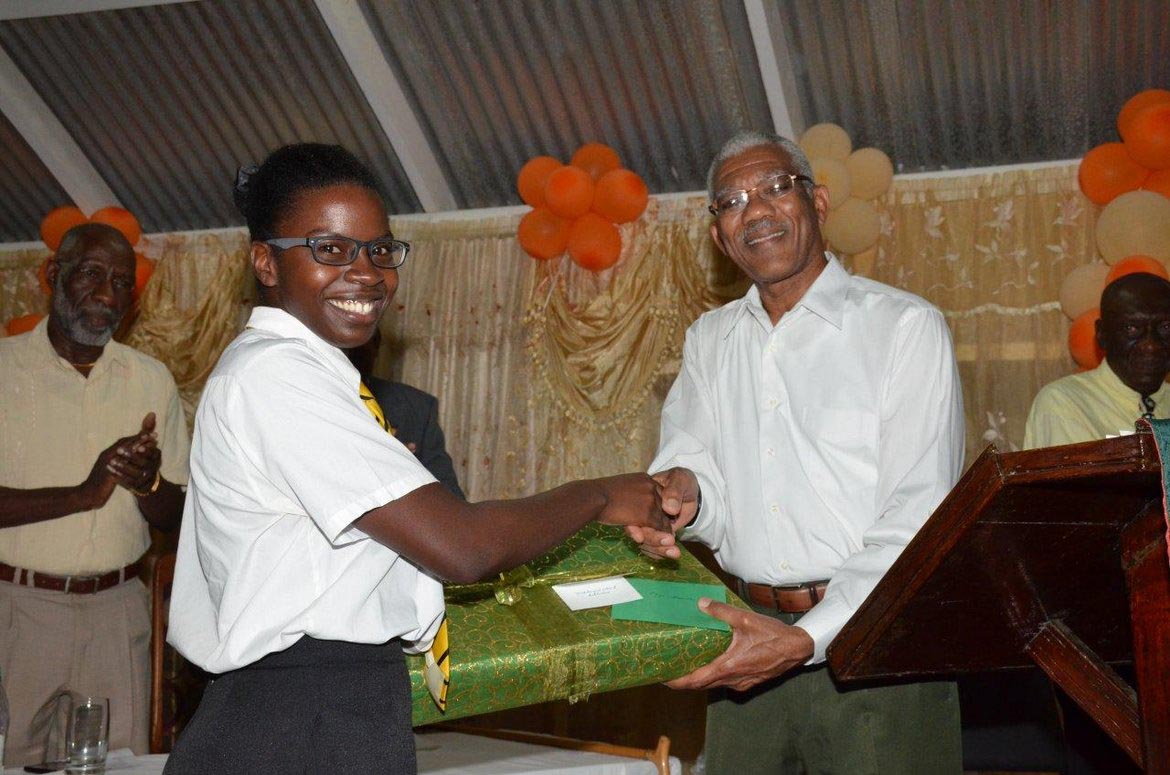 Georgetown, Guyana – (November 15, 2015) There is an old saying “it takes a village to raise a child”. Earlier today, the residents of Ann’s Grove and neighbouring communities packed into the Ann’s Grove Secondary School to celebrate their pride and joy, Elisa Hamilton, on her achievement at this year’s Caribbean Advanced Proficiency Examination (CAPE).

Ms. Hamilton, a proud daughter of the East Coast Demerara Village, secured five grade ones and one grade two at CAPE, and was honoured by her fellow villagers at a simple, yet auspicious ceremony. Her achievement placed her among the country’s top CAPE performers. Also, in 2014, Hamilton secured 20 passes; 19 grade ones and a grade two at Caribbean Secondary Examination Council (CSEC), making her the top Regional performer for that year.

Elisa Hamilton being presented with a laptop computer by President Granger.

On the occasion, the President of Guyana, His Excellency Brigadier David Granger spoke of the important role villages must play in educating the nation’s children. The President said villages, throughout the country, must strive to return to the days when they were all “cradles of democracy”. Over the years, the President noted that village economies have become weakened and they have moved away from being self-reliant.

The Head of State added that school drop out rates across the country are alarming and there is the need for every stakeholder in the society, including families and churches to play their role in ensuring that every child attends school. As part of his Government’s efforts to emphasise the important role villages play in nation building, the President announced that November 7 has been designated “National Day of Villages”.

While this move seeks to give prominence to the role of villages, the President also announced another bold initiative, which will allow villages to be tangibly involved in providing support for the educational development of their young people. Proposing the name “Village Education Scholarship Trust”, the President said once this scheme is established in villages they will each receive funding from the Government, so that the most vulnerable within these communities can be provided with support. The Head of State was however keen on noting that the proposed name does not necessarily have to be used by every village. What is more important is that there is accountability for the disbursement and management of the Trust. 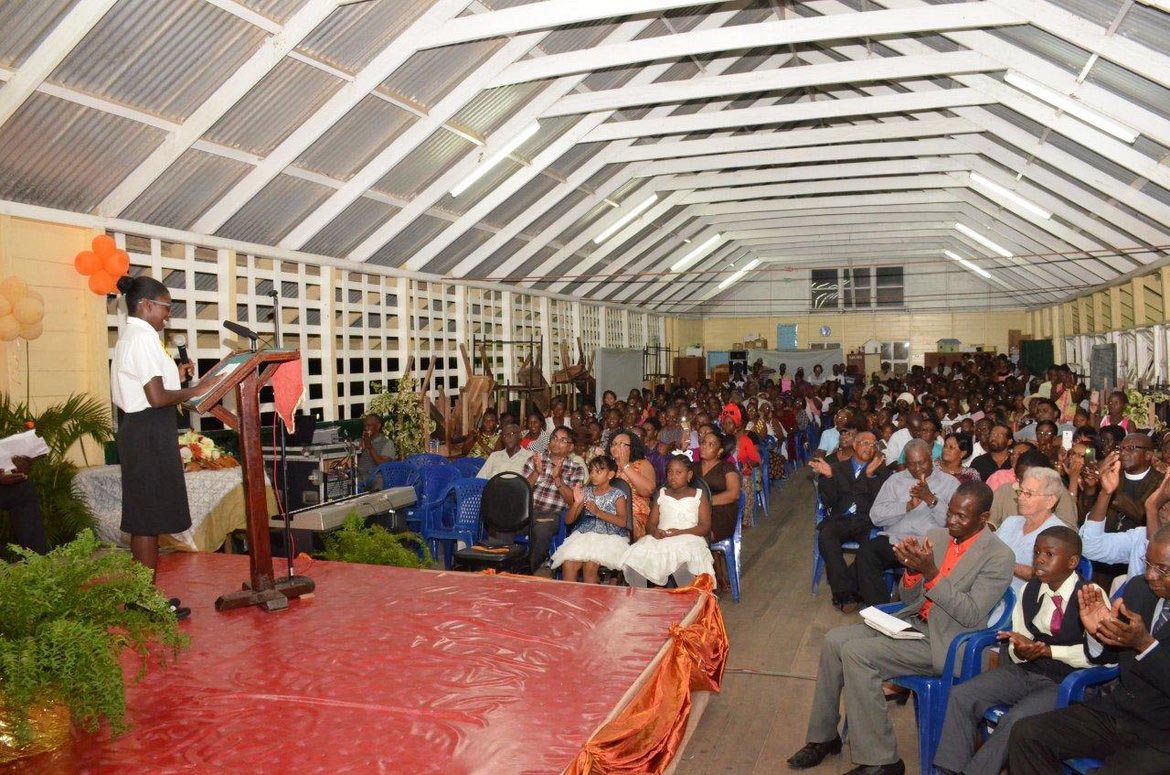 A proud Elisa Hamilton as she expressed her gratitude to her fellow villagers during the ceremony, which was held in her honour.

President Granger said that this initiative, like others rolled out by the new administration, will aid in ensuring equal access to educational opportunity. This latest addition will add to the existing “Three B’s” boats, bicycle and buses initiative, which seeks to provide transportation for children to get to school. “We have to look after children. We have to make sure that they can get to school, in the first place, so that we produce not one… we need thousands and thousands of Elisas. Every village must be able to produce scholars of excellence, scholars of quality,” the President said.

Equally important, the President said, is the need to break the cycle of “hereditary poverty” through education. “The way to do it is by removing inequalities and by giving every child opportunities… Forty years ago there were five tops schools. There should be fifty. There should be a top school in every region. We have to expand. We have to enlarge the number of top schools in the country so that every child in this country could have access to a top school,” President Granger said. The President, in his address to the large gathering, also underscored the role of religious bodies. 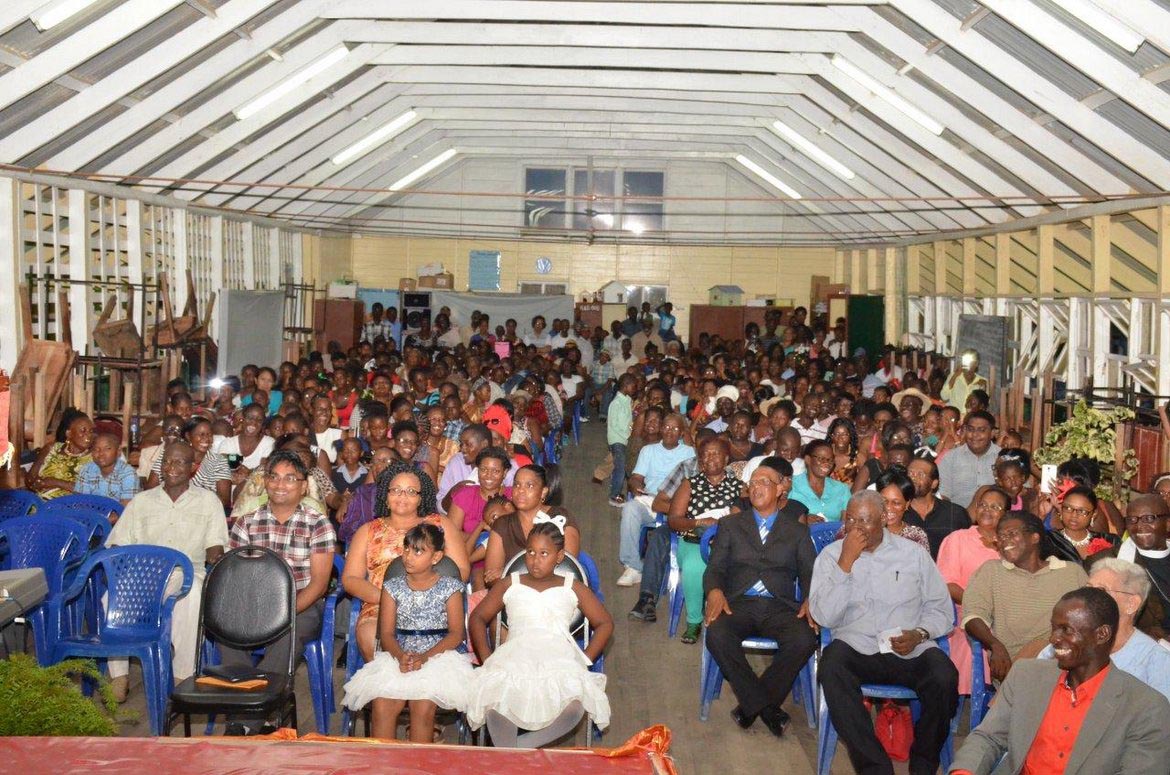 A section of the proud villagers who came out to celebrate with Elisa Hamilton and her family at the Ann’s Grove Secondary School.

The large gathering was also reminded of the importance of all Guyanese having access to the information and technology super highway, which the President says he deems as an entitlement. All these factors the President said are important if Guyana is to move forward and correct the educational deficits, as Guyana cannot move forward if its population is not educated.

Meanwhile, congratulations were in order for Hamilton from the President as he lauded her efforts and that of the villagers who played a role in supporting her development and success. He called on Hamilton to see her achievement as an opportunity, rather than a victory as she leads the way for other youths in her village. “We are here to congratulate her. It is not easy to achieve what she has worked hard for and she deserves to be rewarded and congratulated, but this is an opportunity. It is not victory,” the President said.

Referencing Hamilton’s disappointment with the offer by the previous administration to apply for a scholarship to study in Guyana, China or Cuba, when it had initially been promised that the top CSEC and CAPE performers would be provided with scholarships to study at universities of their choice in any field, President Granger declared that promises must be kept. He indicated that this matter will be resolved by his administration.

Also on the occasion, Hamilton thanked her parents, teachers and her fellow villagers, who supported her throughout her secondary school life. She noted that this event is a clear indication of how much education is valued by her villagers. “To young people I would like to encourage you all to reach for greatness. It does not matter where you came from, what your family background is, what your circumstance is, you have to want it,” were Hamilton’s words of encouragement to the young villagers, who also came out to celebrate her achievements.

Hamilton was presented with a computer by the President, a plague from the Hamilton Award Committee, a cheque from Justice Nadram Kissoon, among other well deserved tokens. A billboard was also unveiled at the Ann’s Grove Market Tarmac in honour of Hamilton’s achievement.