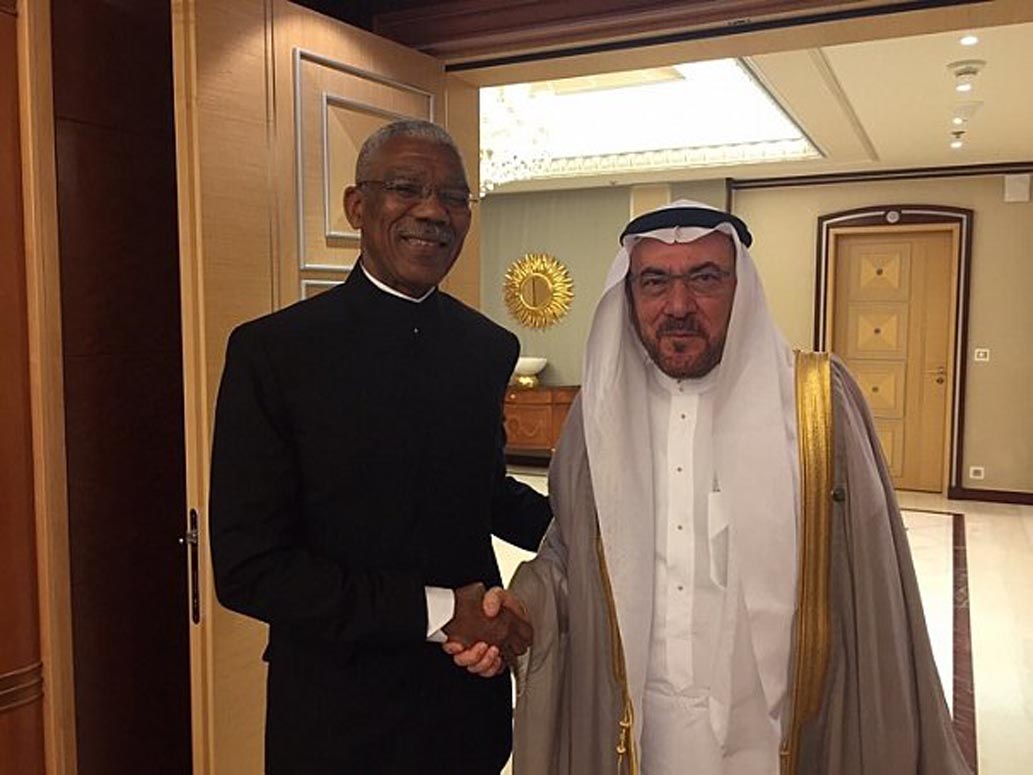 Georgetown, Guyana – (November 11, 2015) President David Granger, who is currently in Riyadh, Saudi Arabia, described Guyana’s participation at the Fourth Summit of the Arab and South American Countries (ASPA) as fruitful and a success. He said that it is an important forum for Guyana to advance its interest with some of the major states in the Arab world and South America.

In his presentation at the summit, which ends today, the President called for the peaceful settlement of disputes and spoke of the importance of cooperation between Arab and South American countries. He also urged the leaders who were present, to work steadfastly on the implementation of the United Nations (UN) Sustainable Development Goals, which were agreed in September at the UN General Assembly.

“We support the thrust of the Arab and South American partnership, which was initiated by former President of Brazil, Lula Da Silva 12 years ago. We feel that it a very useful forum for building international cooperation,” President Granger said.

On the side-lines of the summit, the President and his delegation held a meeting with the Secretary General of the Organisation of Islamic Cooperation (OIC), Iyad Ameen Madani. This is the second largest inter-governmental organisation after the United Nations which has membership of 57 states spread over four continents.

Among its main objectives, the OIC aims to promote respect the right of self-determination and non-interference in the domestic affairs and to respect sovereignty, independence and territorial integrity of each of its Member State and develop science and technology and encourage research and cooperation among its members.

He also added that Guyana is currently working to join the membership of the Islamic Development Bank. Last month, President Granger met with bank’s senior economist, Dr. Salman Syed Ali and its Division Manager of Advisory Services, Yahya Aleem ur Rehman, where he was updated on the bank’s activities in the region and discussions were held on Guyana’s potential for financing.

“These are two initiatives that we will continue to work on to strengthen economic relations,” President Granger said.

The resolution of the on-going crises in Yemen, Palestine and Libya dominated the discussions from the Arab side. President Granger expressed Guyana’s support for the call for Palestinian sovereignty and statehood.

In terms of the Syrian crisis, the tremendous loss of lives and the prolongation of the conflict remains a matter of concern; both the Arab and South American countries agreed that a peaceful resolution should be sought in accordance with the Geneva Communique. Similarly, calls were made for Yemen to fully implement the resolutions adopted by the UN Security Council.

President Granger informed that from the South American side, the main issue that was raised was that of Argentina’s claims on Falkland Islands and said that Guyana reserved its position in this regard.

The next summit will be held in another three years in neighbouring Venezuela. Guyana’s delegation, which was led by the President, included Minister of Foreign Affairs, Carl Greenidge, Director General of the Ministry of Foreign Affairs, Ambassador Audrey Waddell, Mr. Kadim Khan from the private sector, and Guyana’s representative to the UN, Troy Torrington.

Message by His Excellency Brigadier David Granger, President of the Cooperative Republic of Guyana, to the Nation on the occasion of Deepavili 2015 (Festival of Lights)