President Granger calls for a “world at peace” – Remembrance Day 2015 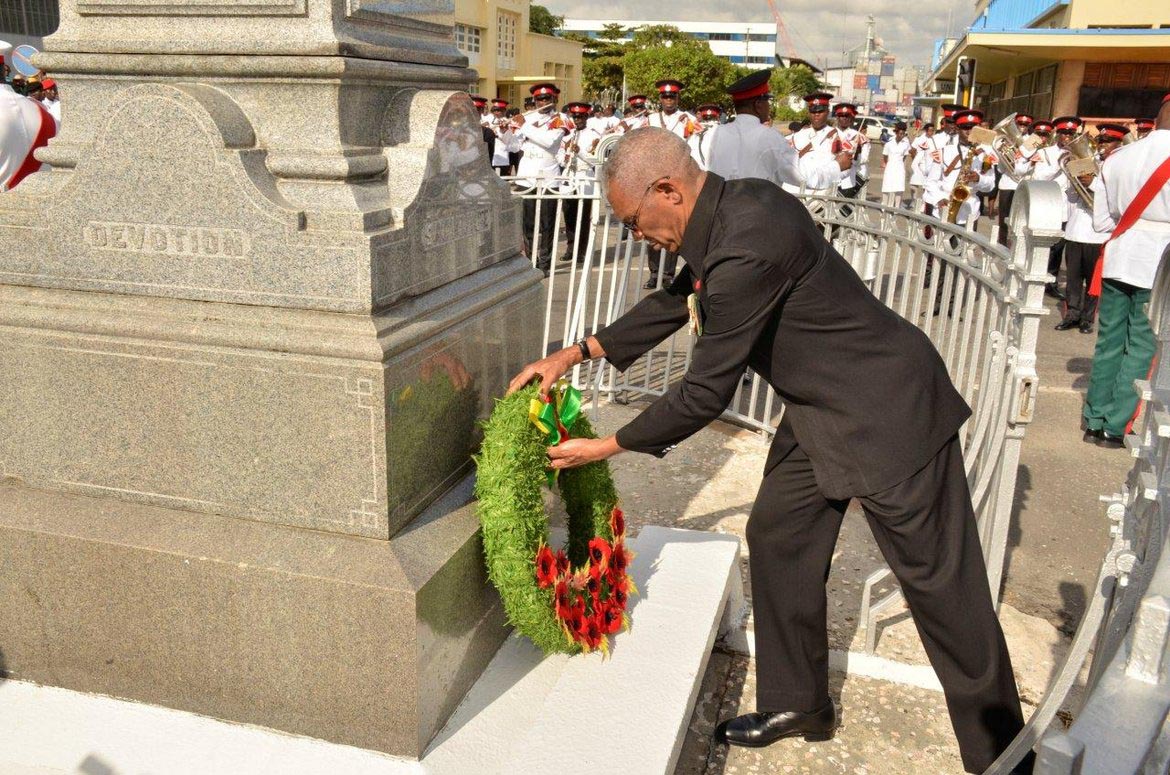 Georgetown, Guyana – (November 8, 2015) President of Guyana, Brigadier David Granger joined with Veterans, members of the Cabinet, the Joint Services, the diplomatic community and a large number of Guyanese at the Remembrance Day War Memorial Service at the Cenotaph on Main Street, Georgetown.

The Commander-in-Chief’s motorcade was escorted to the venue by the Guyana Police Force’s Mounted Branch, where a wreath-laying ceremony was held, preceded by prayers from religious leaders of the Muslim, Hindu and Christian faiths.

His Excellency, Brigadier David Granger, President of Guyana, as he lays a wreath in remembrance of those who paid the ultimate sacrifice during World Wars I and II.

The President, who delivered a brief statement, spoke highly of those who fought and lost their lives in World War I and II, referring to them as gallant men and women, who made the ultimate sacrifice. He said, “We are forever indebted to them for their supreme sacrifice in the cause of peace and freedom.” President Granger also took the opportunity to honour all Guyanese, who died in service to the nation and thanked those who continue to serve. 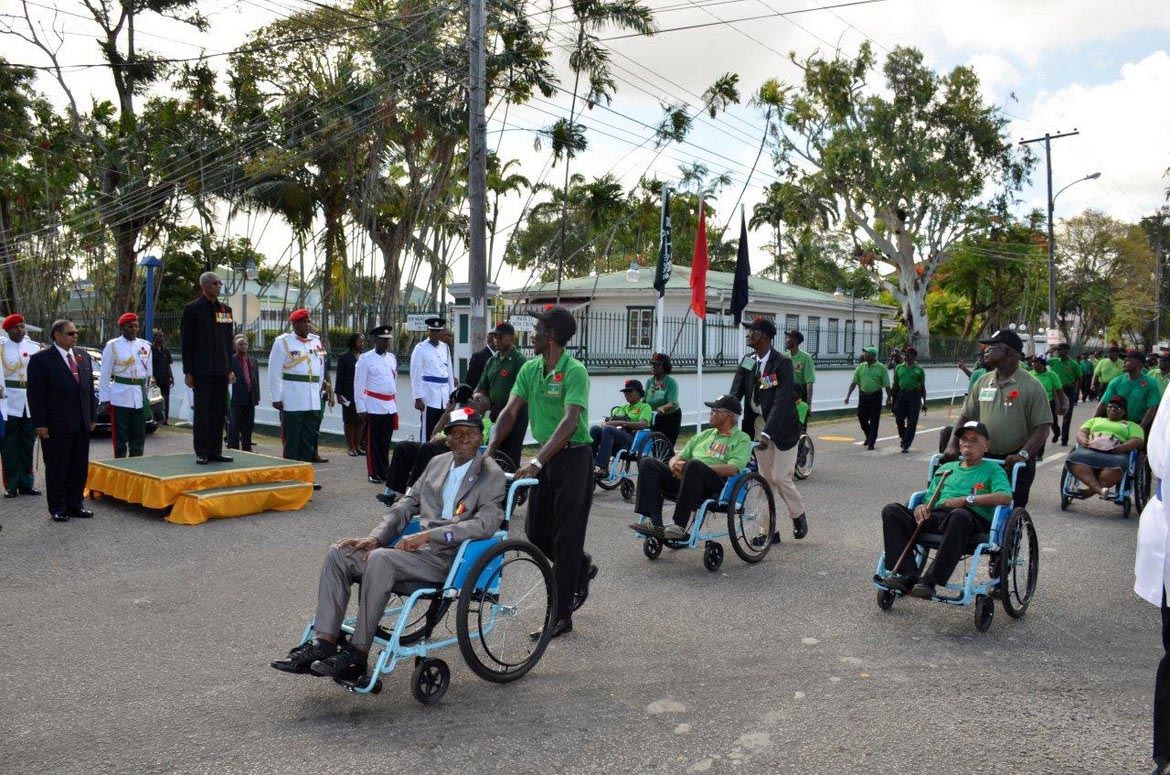 “Let us thank those who continue to defend our territory and our patrimony throughout our country”, he said. The Head of State added that because of the example of all who have paid the ultimate sacrifice, Guyana is resolved to “maintain our efforts for a world at peace with justice and prosperity for all peoples”.

Also laying wreaths at the ceremony were Prime Minister Moses Nagamootoo, the Chief of Staff of the Guyana Defence Force, Brigadier Mark Phillips, Commissioner of Police, Seelall Persaud, members of the Diplomatic Corps and representatives of regional and international bodies and organisations. Memorial Day 2015 was observed with the solemnity befitting the occasion and included a two minute silence, during which attendees were encouraged to think or pray “in remembrance of those who made the great sacrifice”. 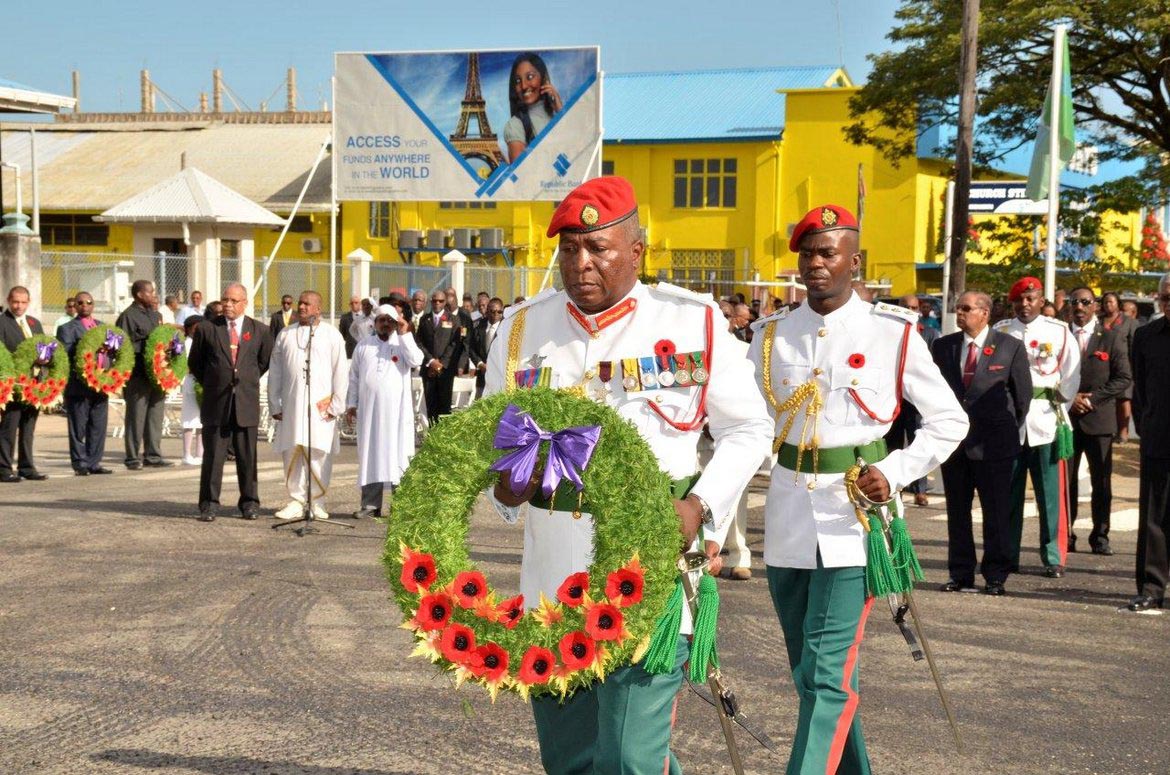 Chief of Staff of the Guyana Defence Force, Brigadier Mark Phillips with the wreath, he placed at the Cenotaph as part of Remembrance Day 2015 observances.

Following the ceremony, the President was given a military salute, during a March-Past by the Joint Services and members of the Guyana Veterans Legion Association at the corner of Main and New Market streets. A large number of ordinary Guyanese gathered to watch the ceremony and followed the parade along Main Street.

The War Memorial, popularly referred to as ‘the Cenotaph’, stands in memory of all Guyanese soldiers, who died in service during the two World Wars. Built of marble, the War Memorial stands at 4.5 metres and is inscribed on its four faces with the words: Devotion, Humanity, Fortitude and Sacrifice. 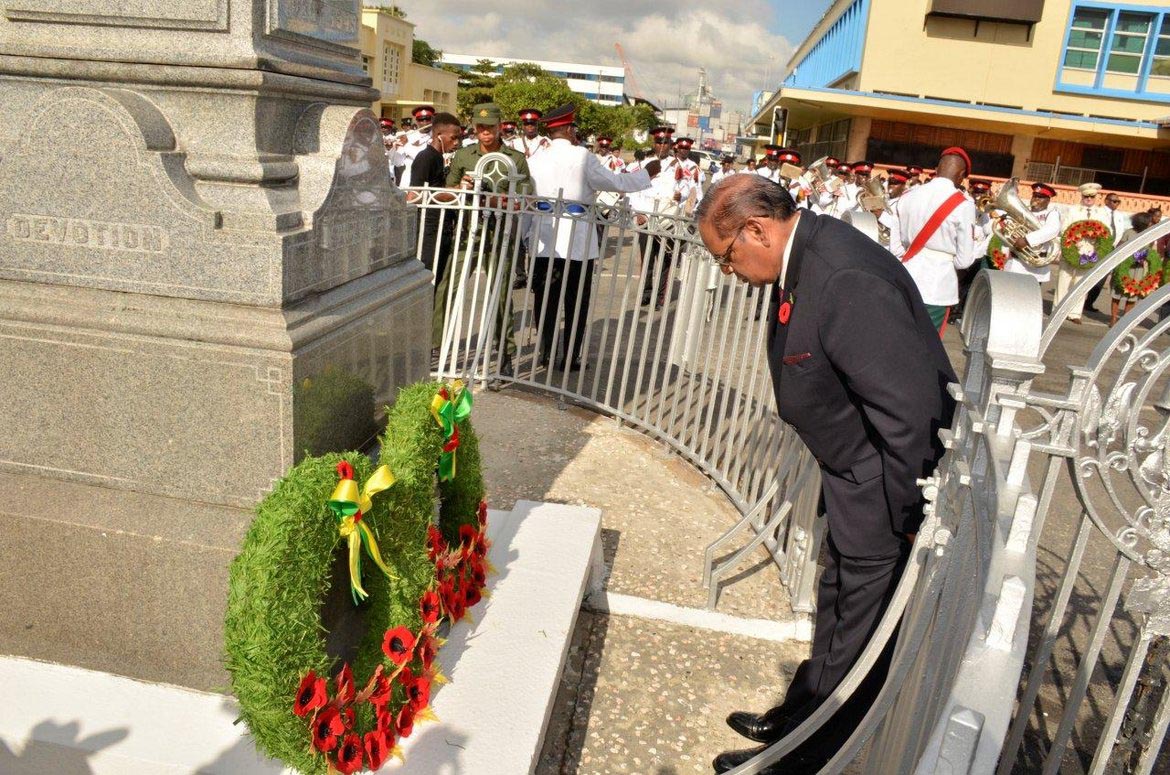 Prime Minister of Guyana, Hon. Moses Nagamootoo, just after he placed a wreath at the War Memorial, this morning.