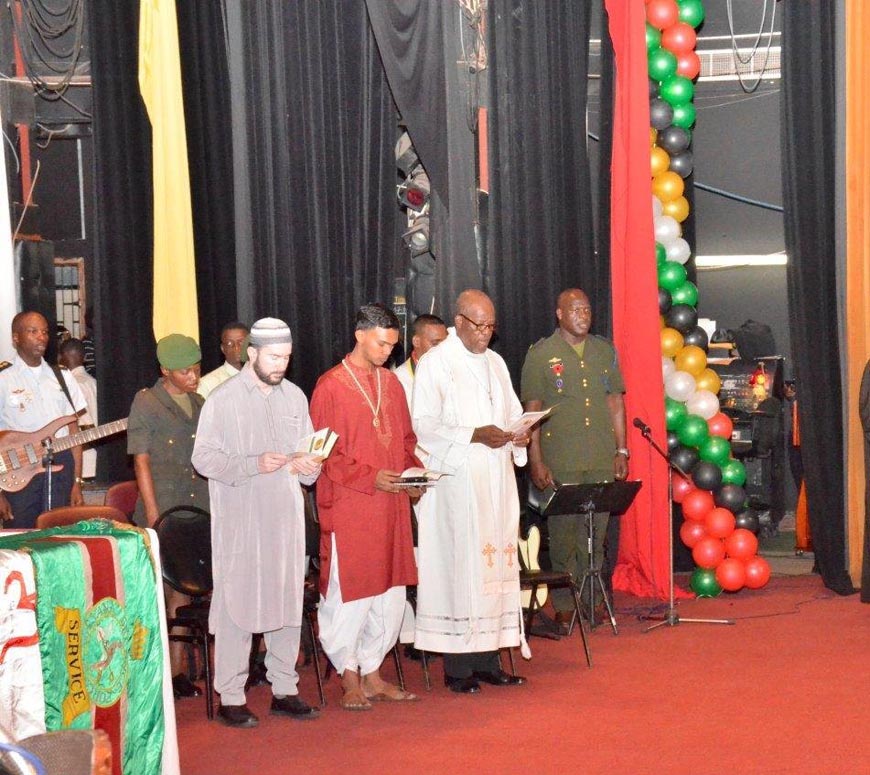 Georgetown, Guyana (November 1, 2015) – President and Commander-in-Chief- of the Armed Forces, Brigadier David Granger today declared that November 1, this year and every year hereafter, will be observed throughout the nation as ‘Defence Force Day”. The President was at the time delivering message at a church service held in commemoration of the Guyana Defence Force’s (GDF) 50th anniversary at the National Cultural Centre.

“The Nation is eternally grateful to the men and women who continue to serve with commitment, constancy and courage in the Defence Force… we are encouraged by the extraordinary example and eternal vigilance evinced by the Force. We are assured by the unstinting and steadfast service of our soldiers…”, the Head of State said.

This past year has been an exceptionally challenging one for the GDF, with both Venezuela and Suriname staking claim to Guyana’s territory. Nevertheless, the President maintains that Guyana’s national defence doctrine will remain one of peace, which is aimed at peaceful diplomacy, detection and deterrence.

“Our doctrine combines all the elements of national power to preserve our sovereignty and to protect our territory. Our people, in this regard, will continue to combine its resources to support the Defence Force, confident in the knowledge that the Defence Force will never let our people down,” the Commander-in-Chief said. 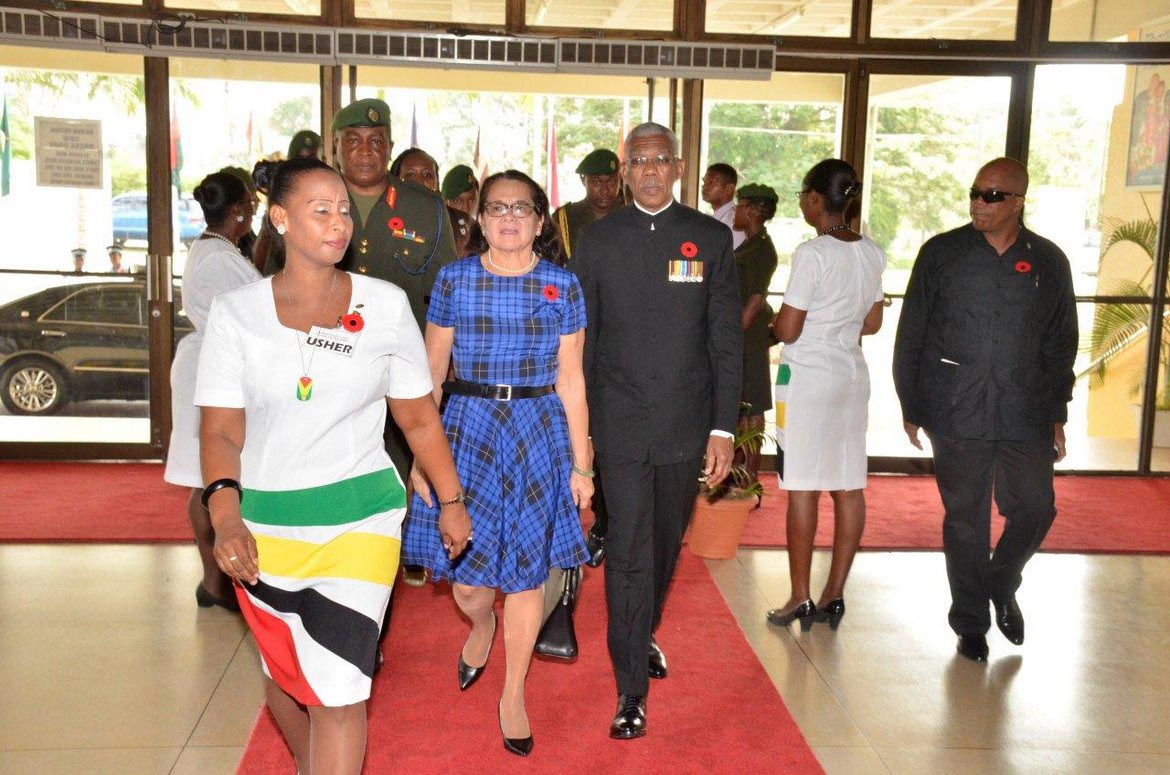 He reminded the Force of its duty as outlined in Guyana’s Constitution “to defend national independence, preserve the country’s sovereignty and integrity and guarantee the normal functioning of institutions and the security of citizens against any armed aggression.” He added that over the last 50 years, the GDF has admirably fulfilled this Constitutional obligation.

Over the years, the Air Corps has undertaken several missions of mercy and relief, the Infantry Corps has supported the civil power in maintaining order, the Coast Guard has and continues to patrol territorial waters, the Special Forces have launched innumerable search and rescue missions in the hinterland and the Reserve Force (Guyana People’s Militia) has supported and reinforced the regular force in its training and operations.

Meanwhile, the President said that the Engineer Corps, which is another important arm, is being restructured to participate more fully in our hinterland infrastructural development plan.

“The 50th anniversary of our Defence Force finds us further along the road to consolidating our defence, reaffirming our democracy, protecting our territory and making Guyana a safer place for all,” the Head of State said. 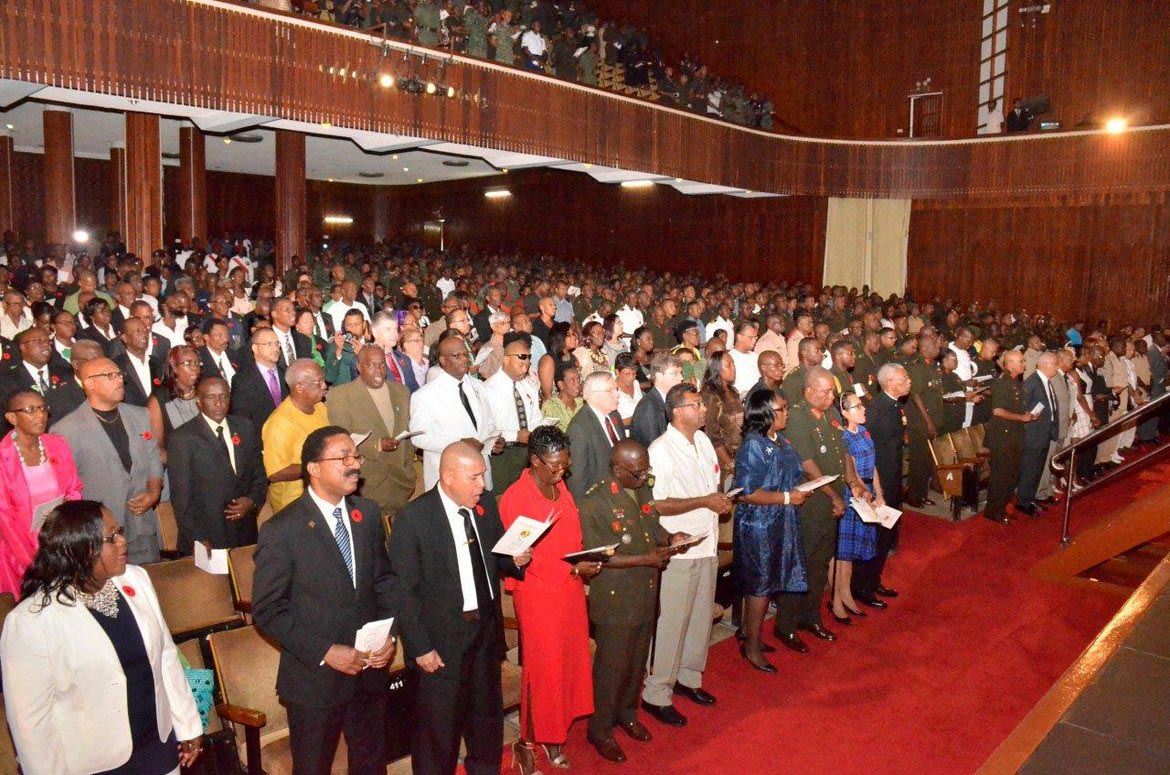 President David Granger and First Lady, Mrs. Sandra Granger (extreme right) along with Chief of Staff, Brigadier General, Mark Phillips and his wife and Ministers of the Government at the anniversary church service

During the ceremony, prayers were offered by spiritual leaders from the Christian, Hindu and Muslim faiths and a special sermon was delivered by one of the Force’s very own veteran, Randolph Reynolds, who is now the Archdeacon of St. Bridget’s and Parish Priest of St. Sidwell’s Anglican Church.

The Priest called on soldiers to understand their role, which is to serve and protect the people of Guyana and to be guided by the Constitution in the discharge of that role. He said that for military men and women, discipline and obedience should be like their own shadow from which they should not divorce themselves.

The GDF was established on November 1, 1965, one year before Guyana was granted Independence by Great Britain. It is celebrating its 50th anniversary under the theme, “Commemorating the Past, Celebrating the Present, Carving the Future.”