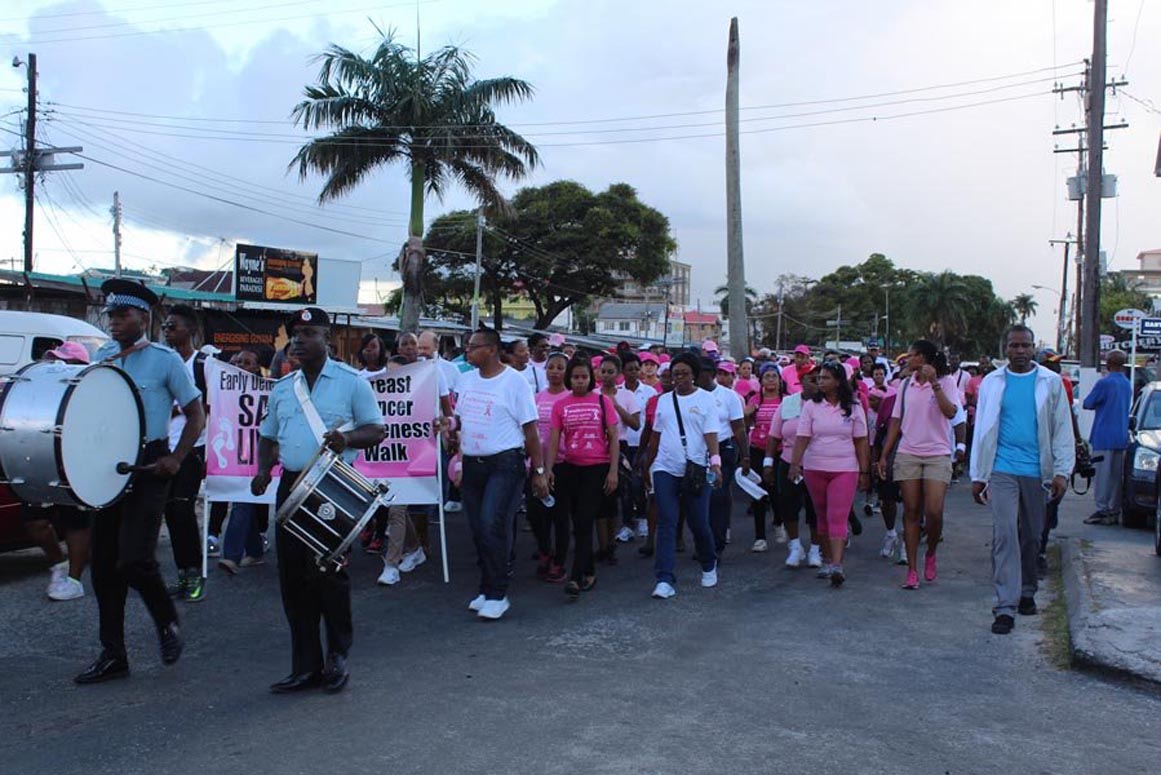 Georgetown, Guyana – (October 31, 2015) Breast cancer survivors, their families and supporters were lauded for their strength, fortitude and dedication by First Lady Mrs. Sandra Granger, today, as they turned out for the annual ‘Uniting against breast cancer awareness’ walk. The event was organised by the Breast Cancer Awareness Committee, under the theme “Uniting against breast cancer; early detection helps save lives”.

The large group of men, women and children, most of whom were clad in pink to show their support, gathered for the 6:00 am start time at Parade Ground, Middle Street and followed route through Waterloo Street, into Church Street, Irving Street, Lamaha Street and then into Camp Street before heading back to Parade Ground.

At the end of the walk, the First Lady in brief remarks to the large gathering, reminded them of the need to raise awareness. “We have to keep conscious in the minds of citizens, especially our women, the vital importance of caring for themselves, of early screening and detection so that they will have a greater chance of survival of what I see as a scourge in women’s health,” the First Lady said. She also congratulated the organisers for pulling off such a well-attended event.

A representative from the Ministry of Public Health, Shabana Shaw, who also addressed the participants, said that the Ministry will continue to partner with organisation to raise awareness on breast cancer. She also took the time to salute women who have lost the battle to breast cancer as she called on women to do their part and get screened.

A section of the large number of persons who came out to support the breast cancer awareness walk.

Leading up to today’s event, the branded pink T-shirts were sold for $1500 at various locations throughout the country. The proceeds will go towards offering free breast cancer screening. The month of October is designated as s Breast Cancer Awareness month and as part of the launch of the month of activities, members of the Guyana Breast Cancer Awareness Committee and other volunteers wrapped pinked ribbons on the trees along Camp Street Avenue, Georgetown.

According to President of the Committee Bibi Hassan her committee is in the process of launching a Cancer Foundation in Guyana, with the intention of being able to do more for those diagnosed with cancer.