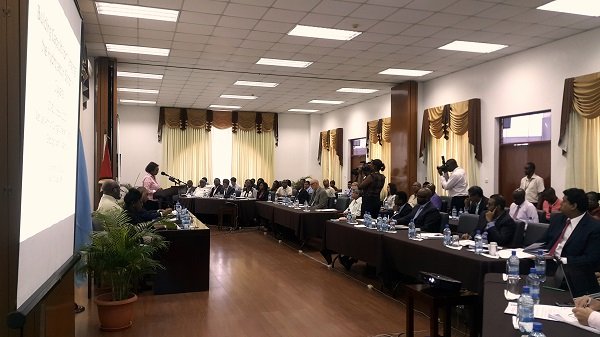 Georgetown, Guyana – ( October 30, 2015) Minister of Governance, Raphael Trotman, who has responsibility for the Natural Resources and the Environment sector, has assured of the Government’s commitment towards protecting and safeguarding the Hydrocarbon sector. He noted that Guyana will not fall prey to the ‘Dutch disease’, but would implement all necessary measures in ensuring that this critical sector is made sustainable.

Minister Trotman was at the time addressing participants at the opening of the Building Capacity for Managing the Hydrocarbon Sector for Development in Guyana Seminar which was held at the Arthur Chung Convention Centre (ACCC) today. This is the first such initiative under the current administration to develop a framework to manage the emerging oil and gas sector.

The participants at the Building Capacity for Managing the Hydrocarbon Sector in Guyana Seminar at the Arthur Chung Convention Centre earlier today.

The focus of the two-day Seminar will be on key elements for designing and implementing the legal and regulatory frameworks to effectively govern the petroleum sector; addressing gender-sensitive; conflict risks and environmental and social sustainability; revenue management; and human, social, physical and financial capital development to support economic diversification.

Pointing out the importance of the seminar, Minister Trotman said that with the discovery of oil by United States (US) Oil giant, ExxonMobil, Guyana stands before an open door which leads to great opportunities. He noted that while Guyana is indeed eager to enter this new area of development, care, caution and patience should be exercised. Minister Trotman noted that if not managed properly, this sector can begin to hurt the country.

“Guyana is being proactive in its approach to this emerging sector to ensure that all mechanisms necessary for the effective management and the best outcomes for its people are in place even before the first barrel of oil is brought to the surface, refined and sold. Today is one such step in that direction as the Government of Guyana with support from the evergreen and ever ready UNDP seeks to build the capacity of technicians, policy makers and other interest groups on the issues and challenges surrounding this emerging sector. It is about new opportunities, a new Guyana, and a new people,” he said. 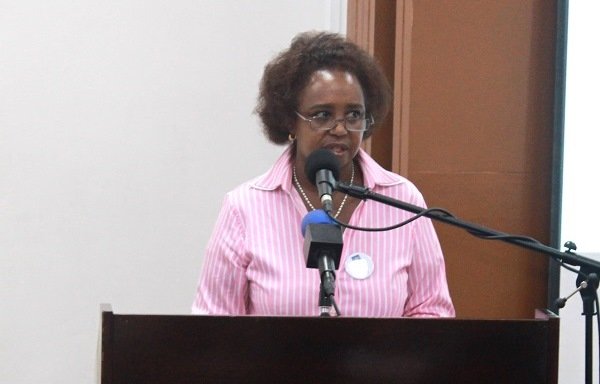 Noting that the preparation for the development of a full-fledged Hydrocarbon sector will take many years and requires a strengthening of institutional frameworks, not only within the natural resources sector, but also in other spheres such as education and social protection, Minister Trotman posited that it will have to be a national effort, in which all Guyanese are involved.

Minister Trotman said that given the fact that the World energy demand is growing, it would therefore mean that there is room and much benefit for Guyana to not only provide for its energy needs but also to join the wider energy market. However, this would demand that several issues be addressed.

“This would raise a number of issues with which the country must treat responsibly; embracing a new world order that expects transparency in the management processes and equity in the sharing of natural resources as equally as it demands respect for the environment and a lessening of global warming and the movement towards the greening of the economy which is an inevitability whose time has come,” he outlined.

Pointing out that the development of the oil and gas sector is notorious for the risks and threats that it poses to economic, social and political stability, and the environment, the Minister of Governance posited that good governance and astute management of the sector is a major challenge for governments and domestic institutions.

“The emerging consensus on mitigating risk is basically twofold: (a) Governments must put in place institutions and regulatory frameworks that allow for transparent and efficient management of oil revenue; and (b) oil windfall should be directed towards productive investments in physical and human capital to prevent economic distortions and the occurrence of “Dutch disease” so that long-term equitable growth can be generated. To this end Government seeks to act wisely and has sought and received support from a number of international experts and agencies for the development of its regulatory framework, prudent fiscal management policies, ensure transparent processes for good governance,” he explained.

“Oil is coming; we must prepare and become adept of what is going to be bequeathed and placed into our hands. We must make the necessary efforts to ensure that in decades to come we have something to show for our sustainable utilisation of our natural resources,” the Minister said.

In the meantime, Khadija Musa, United Nations Coordinator and United Nations Development Programme (UNDP) Resident Coordinator, in her remarks said that having oil resources in a country can be both a blessing and a curse. However, this she said, is dependent on the manner in which the sector is managed.

“We always hear that having resources such as oil and gas is a curse. These resources only become a curse if the wrong policies are implemented and if consultation is not made through the community to develop the resources. We need to have policies which are well implemented and well used. Most of the countries that failed did not have the expertise but by opening the country to expertise and advice, we can avoid that,” she said. 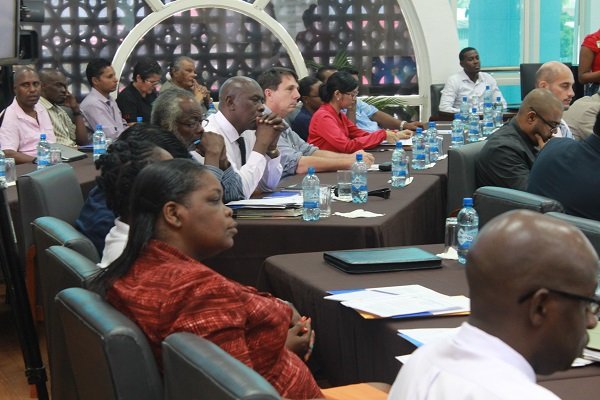