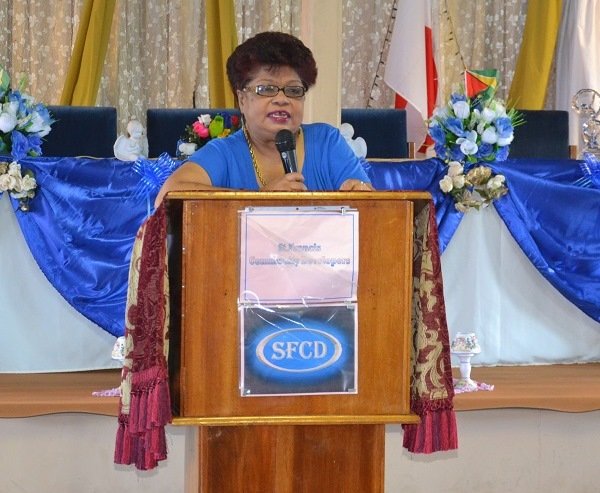 Georgetown, Guyana – (October 28, 2015) Minister of Social Cohesion, Amna Ally, today kicked off a national sensitisation programme in Region Six (East Berbice- Corentyne) in keeping with some of the short term recommendations, which were made at the Social Cohesion Roundtable held on September 3, at the Arthur Chung Convention Centre (ACCC).

One of the recommendations at the Roundtable called for the implementation of sensitisation programmes, through conversations across the country with a target audience of stakeholders. The Ministry of Social Cohesion decided to begin these conversations in Region Six, before moving to other parts of the country.

Minister Amna Ally, accompanied by Reverend Dexter Sansculotte of the AME Zion Church, visited the St. Francis Mission Community Development Centre in Rose Hall, Berbice, where her Ministry partnered with prominent civil society activist, Alex Foster, to meet and engage a wide cross section of stakeholders of the region on Social Cohesion and how it can be achieved.

The two-day event began on Tuesday, October 27, 2015 and concluded today. However, it is the beginning of the country wide conversations planned by the Ministry. It involved group discussions on thematic areas such as education, religion and culture and ways in which the Ministry can work to achieve national unity.

Speaking to the stakeholders, which included members from all of the religious organisations, schools, community development groups and private businesses, Minister Ally said that the purpose of the activity was to involve citizens at the community level in a national conversation on the promotion of togetherness and national unity. This, she explained, was one of the primary mandates of her Ministerial post.

“Social cohesion is high on the agenda of the developmental priorities for our government. Therefore, the Ministry of Social Cohesion will work to ensure that Guyana becomes a cohesive society, to the extent that the inequalities, disparities and discrimination or any distinctions that define division are eliminated in a planned and sustainable manner,” the Minister told the Region Six stakeholders.

She noted that Guyana can only be a socially cohesive nation when the citizens work on together on a shared vision. This she said, can be achieved through community based projects and programmes, an area being embarked upon by her ministry.

“My Ministry has adopted a community driven approach in all of the ten regions to sensitise people on the work plan for the Ministry and to formulate community driven projects and programmes and this will be a continuous exercise in our efforts to foster greater social cohesion throughout Guyana,” she said.

As she outlined her plan for the achievement of cohesiveness in the country, she reiterated that the work must not be left solely on Government, but citizens have a responsibility to support the fulfillment of the mandate set out.

“You have the clear responsibility to foster unity among diverse populations and create a vision for a common future that pivots on the acceptance of differences with a view to harvesting the strengths that are inherent in diverse societies… You can make a positive change in our country… We recognise that behavioural change is a pillar of reconciliation in this country and we must all contribute to achieving the good life that we all want right here in Guyana,” she said. 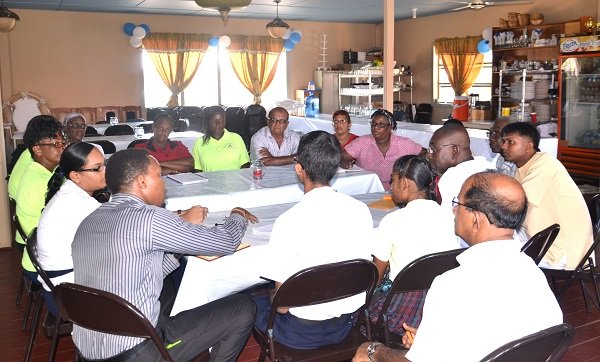 One of the groups in session at today’s sensitisation programme held in Rose Hall, Berbice.

As part of the Ministry’s programme, Minister Ally said that the engagements will see more schools becoming involved since it was the belief of the participants at the Roundtable, that education at school level will greatly help the cause of the Ministry.

Additionally, Minister Ally highlighted that as part of the working plan formulated at the Roundtable, her Ministry will soon embark, on a series of training programmes, aimed at not only civil society but governmental functionaries as well.

“We will also provide training and programmes for social cohesion management. We will provide training for government officials, for staff at the regional offices, for our trainers and for key officials. This will ensure that key strategic state and government stakeholders are effectively cooperating with the Ministry of Social cohesion on the agenda set out,” she said.