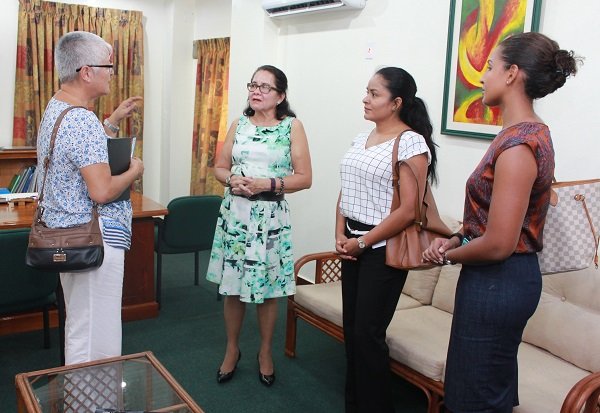 Georgetown, Guyana – (October 28, 2015) First Lady Mrs. Sandra Granger, earlier today, met with Ms. Ann Geer, Executive Committee member of the United Women for Special Children, along with other members of the organisation. During that meeting, discussions were held on areas of collaboration, which will aid in expanding the work of the office of the First Lady in her quest to touch the lives of the most vulnerable in society.

The First Lady said she was pleased to meet with the group as they have been able to identify areas of possible collaboration since their work ties in with her mission for helping vulnerable groups in society.

The United Women for Special Children was formed in 1987 by Natalia Heyroid of the then European Economic Commission and group of Spanish women. However, it was only registered as a charitable organisation in 1993. The primary objective of the organisation is to help children with special needs meet their highest potential by assisting with needed resources, including educational, recreational, life training or welfare assistance.

In picture, (from left) First Lady Her Excellency Mrs. Sandra Granger, Executive Committee Member Ms. Ann Geer, President Angela Rahaman, and Vice President Anya Persaud in discussion during their meeting at the office of the First Lady at State House.