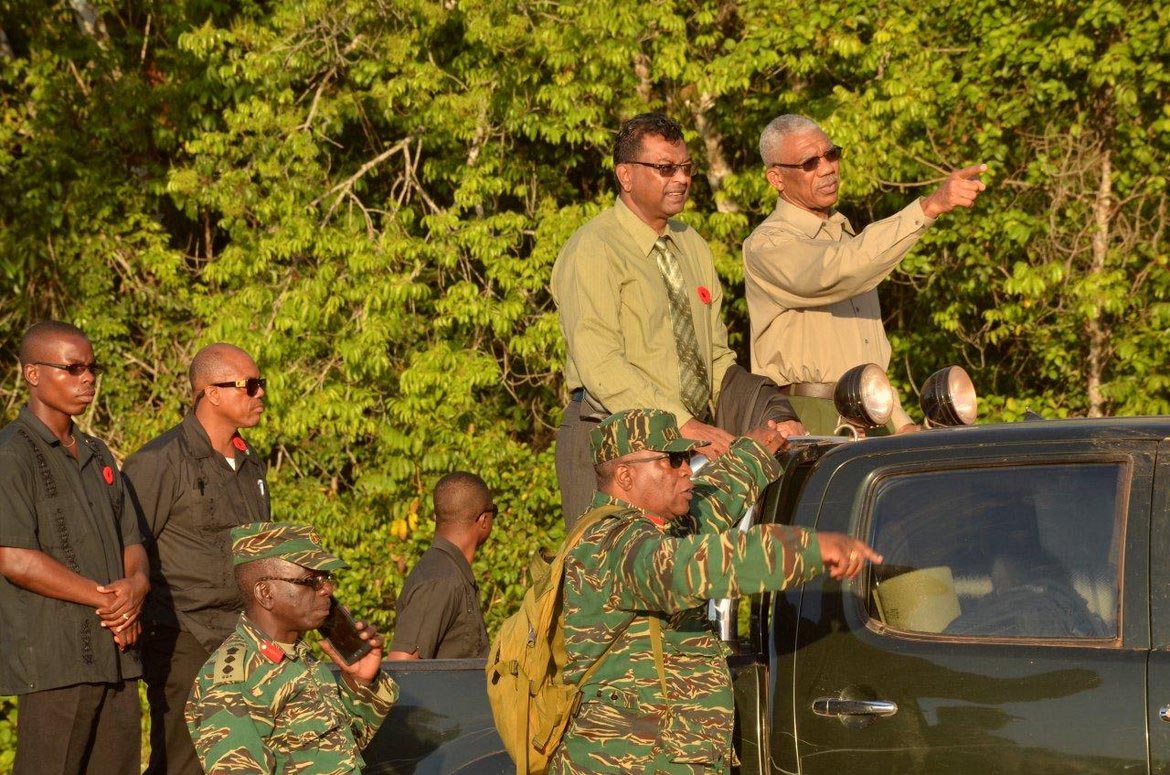 Georgetown, Guyana – (October 26, 2015) “We cannot sell out. We cannot give away. We cannot offer the adversary any corridor or any passage.” Commander in Chief, Brigadier David Granger made that declaration, this morning, as he lauded the Guyana Defence Force (GDF) for the successful completion of Exercise Greenheart, a tactical exercise, in the Cuyuni-Mazaruni area in Region Seven.

Noting that the GDF is the only organisation that stands between the adversary and the people of Guyana, the President said that it is this generation’s obligation to ensure that the children of Guyana inherit the country we inherited. The Head of State made these remarks to members of the GDF and residents of Bartica at the Bartica Community Centre Ground after observing the final attack of Exercise Greenheart, earlier this morning.

Commander in Chief, Brigadier David A. Granger observing the advance and attack phase on the final day of Exercise Greenheart, this morning in Region Seven. With him are Minister of Public Security Khemraj Ramjattan, Chief of Staff of the GDF, Brigadier Mark Phillips and Colonel George Lewis, Assistant Director of Operations.

Describing the exercise as a magnificent one, the President said that the GDF have demonstrated that after 45 years of training, they are a jungle force to be reckoned with. He said, “What you have done here today is exemplary.” Stressing the importance of exercises like this one, President Granger said, “People must know that when they come into Guyana to invest, they will be coming into a safe environment that is protected by one of the best defence forces in the Caribbean, the GDF.”

The Head of State added that Guyana is committed to protecting foreign direct investments and declared that no country must intimidate or threaten investors. Last week, in his address to Parliament, President Granger had indicated that Venezuela, through its Ambassador to Ottawa, had sent a letter to Guyana Gold Fields Incorporated, who are operating a large mining operation in Aurora, Region Seven, accusing them of infringing on the territorial sovereignty of Venezuela.

“What you have done here today, GDF, is an example to show our foreign direct [investors] that their investments are safe and that Guyana will use every fibre of its State system of its defence forces to protect their investment,” the President declared.

In congratulating the GDF on the successful completion of the exercise, President Granger told the soldiers that they have demonstrated that they are an army of the people. These comments were met by loud cheers by the school children and residents of Bartica who had gathered to watch the march pass and speech by the President. He said, “Every soldier is a citizen and every citizen is a soldier.” 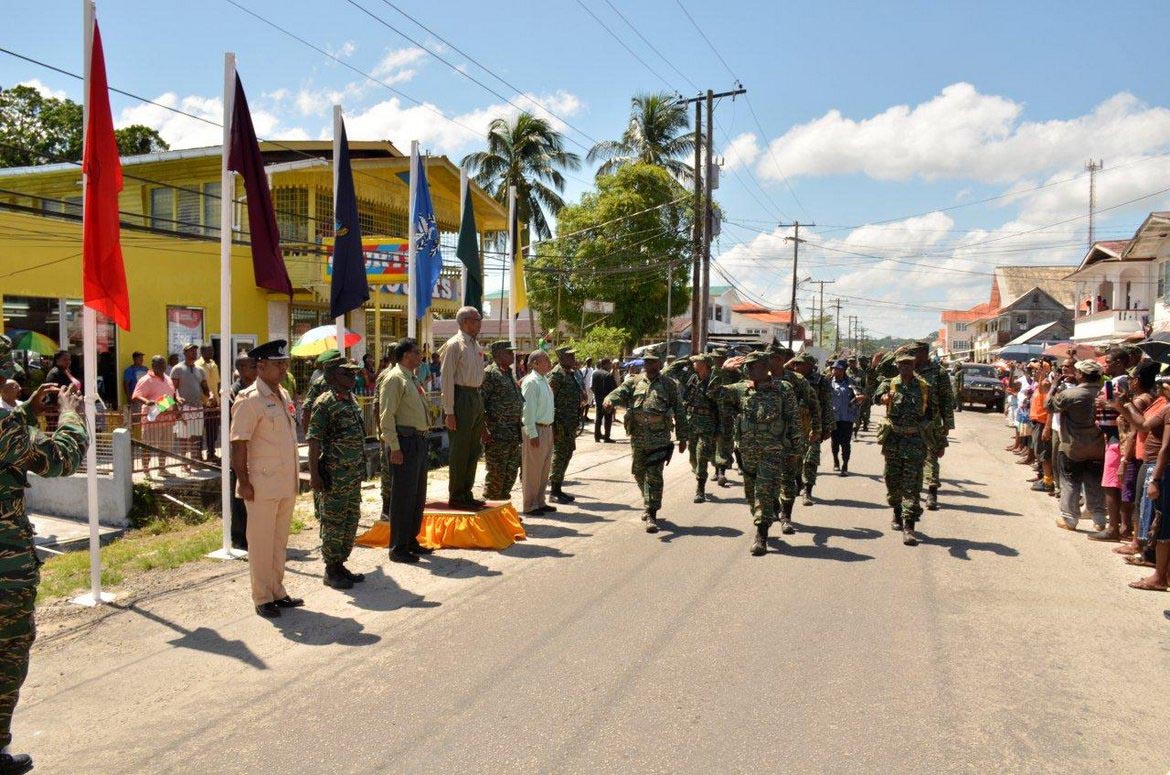 Chief of Staff, Brigadier Mark Phillips, in an invited comment, said, “I want to let the Guyanese people know that they have a defence force that is training all the time; that is competent and ready to defend Guyana.”

He added that “After the President’s speech two Thursdays ago at the GDF Headquarters on the Total Defence Policy, we decided to become more focused on our primary role of defence. This [the exercise] is a part of the efforts to re-orient the troops with their primary role and based on my visit to the positions, I would say that we have achieved the objectives of this exercise.” Expressing satisfaction with the Exercise Greenheart, the Chief of staff noted that as is customary following exercises, there will be an assessment of the performance, which will ensure that improvements are made as the Army continues its cycle of annual exercises.

Meanwhile, Colonel George Lewis, Assistant Director of Operations explained that the exercise commenced on October 20 and said that the troops advanced over 24.5 kilometres for the first three days of the exercise, following which, they took up defensive positions in the jungle. They then participated in exercises including patrolling, ambush and close target reconnaissance and concluded with the final advance and attack this morning. 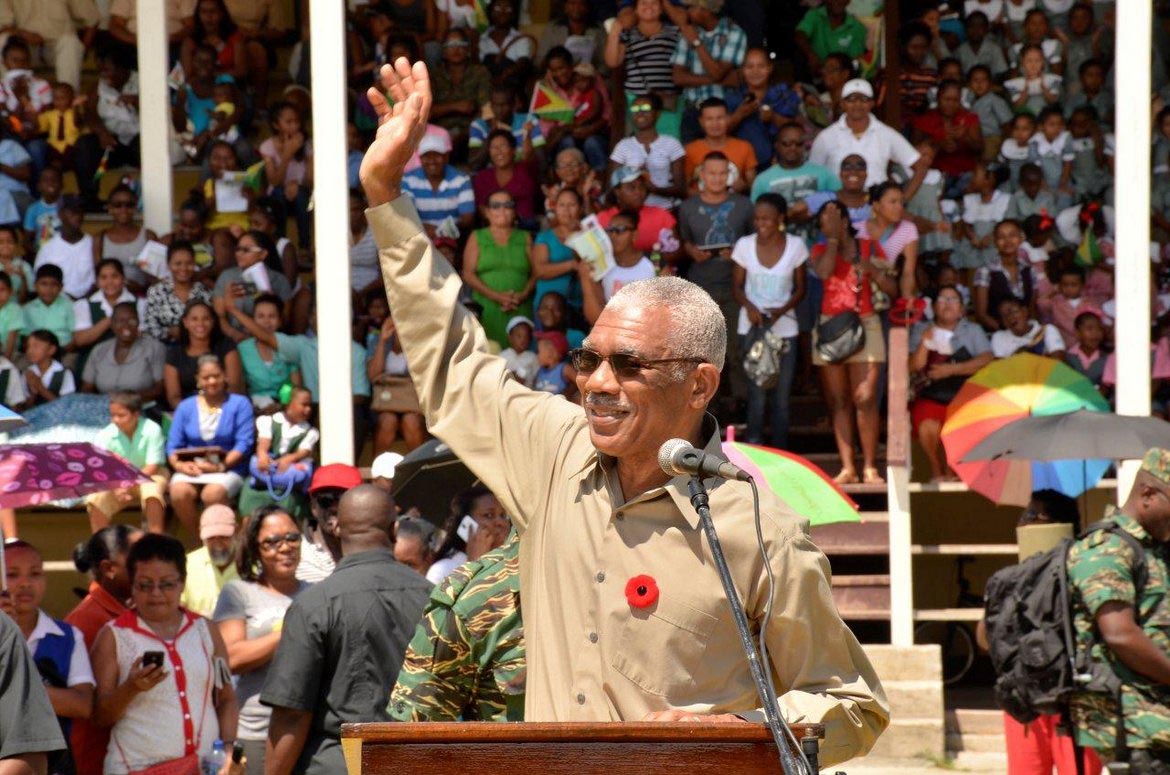 Colonel Lewis said, “The purpose of the exercise was to identify deficiencies and at the same time to test the preparedness of our troops to conduct operations in the jungle. We wanted to test our troops to see in which areas we needed to focus on and train them.”

As part of their training, every soldier in the GDF will have to complete jungle warfare training at the Colonel Robert Mitchell Jungle and Amphibious School (CRMJATS) at Makouria, Region Seven. 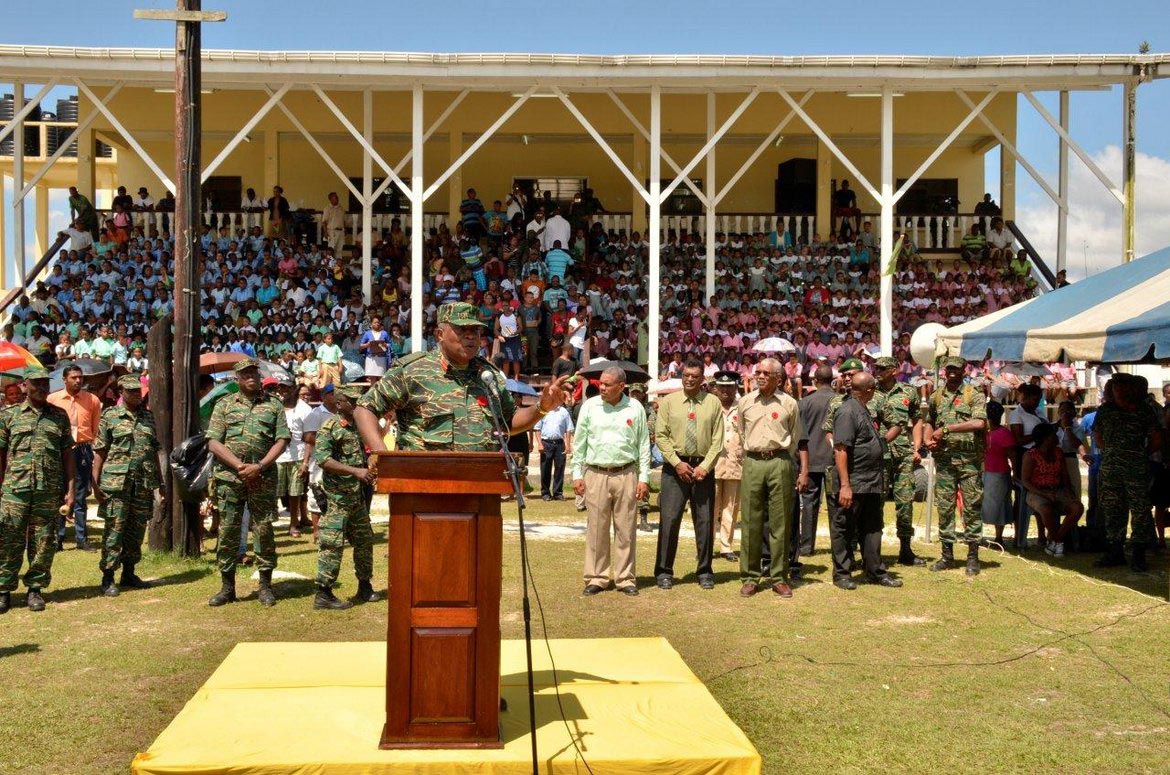 Chief of Staff of the GDF, Brigadier Mark Phillips addressing soldiers and residents of Bartica at the Community Centre Ground.