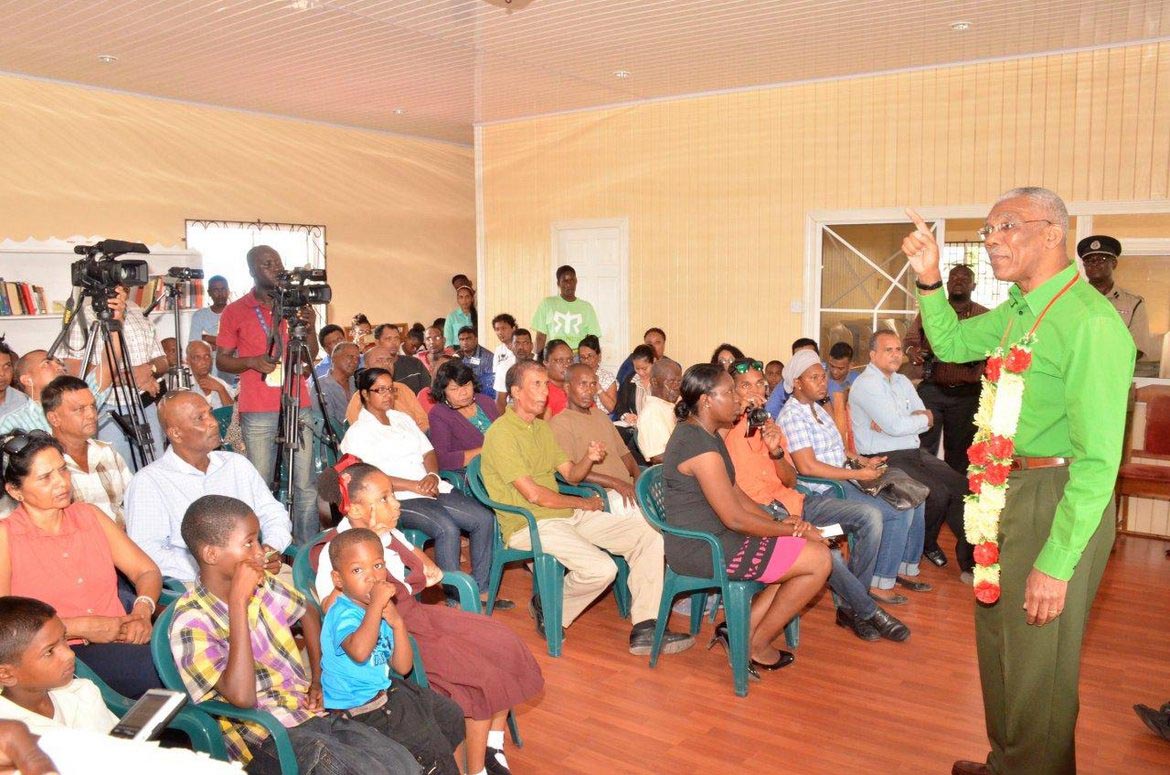 Georgetown, Guyana, (October 26, 2015) President of Guyana, His Excellency Brigadier David Granger says his administration is committed to working with communities in the East Berbice Region to ensure that the population is better educated, unemployment is reduced and citizens are made more self-reliant. These were some of the commitments made by the Head of State during a tour of the Mibicuri Community Developers Life and Skills Training Centre in Black Bush Polder, Region Six (East Berbice-Corentyne), on Sunday.

During an interactive session, several issues affecting Mibicuri and other neighbouring communities were raised. These included; unemployment, the high cost of production in the rice industry and the under development of lands in the community.

The Black Bush Polder community is known for its vast agricultural landscape. However, farmers told the President that help is needed to bring down the cost of production. One resident also spoke of the need for persons in the community to be afforded opportunities to further their studies in technical fields.

The President in his response, said all of the issues are intricately linked to the need for a better education system, which his government is working towards. “I would just like to say that my biggest concern is the education of young people; next to education is jobs, getting jobs for young people…,” President Granger said.

The President underscored the need for a higher level of education and the requisite skills training in communities that will fit into the needs of that community.

“We need to become an agriculture power house in the Caribbean. Guyana is the biggest Caribbean country. It is the most beautiful Caribbean country; everything we produce could eventually be marketed somewhere in the Eastern Caribbean,” the President said.

He added that for this to become a reality there is need for increased value added production and lowering the cost of production in order to ensure a competitive market. The President reminded the residents that, “this is a competitive world, we have to compete, we have to change technology, we have to ensure that when we produce, rice bauxite, and gold it is done more cost effectively.”

In this regard, he said that farmers in general need to start looking at new methods when it comes to production.

President of Guyana His Excellency Brigadier David Granger during an interactive session with residents of Black Bush Polder, at the Mibicuri Community Developers building on Sunday.

“We have to look at the methods that we are using. It comes back to education, to preparing young people for the world of work. This is the part of the whole challenge of accessing technology. The rice farmers need to access education that will make them able to access the right type of technology,” he added.

While stating that his government will continue to work with farmers to address this issue, he said that it is his belief that part of the issue facing the rice industry is the challenge of accessing new technology. Nevertheless, the President told the gathering that it is his vision to see a more competitive and efficient rice industry, and Government will support this cause.

Meanwhile, the President also took the time to address some other issues affecting the Black Bush Polder community, which has been plagued with a high incidence of suicide. While lauding the efforts of the Mibicuri Community Developers, the President said the issue needs a holistic approach and that the entire community should become more involved.

“We need to address this issue. Happy people don’t commit this act. We must look at the causes; social break down, unemployment. I don’t have all of the answers. We need to continue to investigate. We hope these organisations can educate people,” the President said.

The President assured that he is seeking advice from his Advisors with the aim of coming up with more a comprehensive solution to addressing the social ills that affect many communities throughout the country.

The Mibicuri Community Developers Centre was established on October 22, 1977 with the mission of working with residents of the community to address social, economic, and health issues affecting the area. It is the only Non-Governmental Organisation in that area with the ability to offer a wide variety of training and social services.

Through a grant from the Embassy of Japan facilitated by His Excellency, Mr. Takafumi Ura, under the Assistant for Grassroots Human Security Projects, the organisation was able to expand its services, to offer early childhood education programmes to surrounding communities. Under that initiative the organisation was able to construct a larger building, which is now equipped with a kitchen, computer lab, and play area for children.