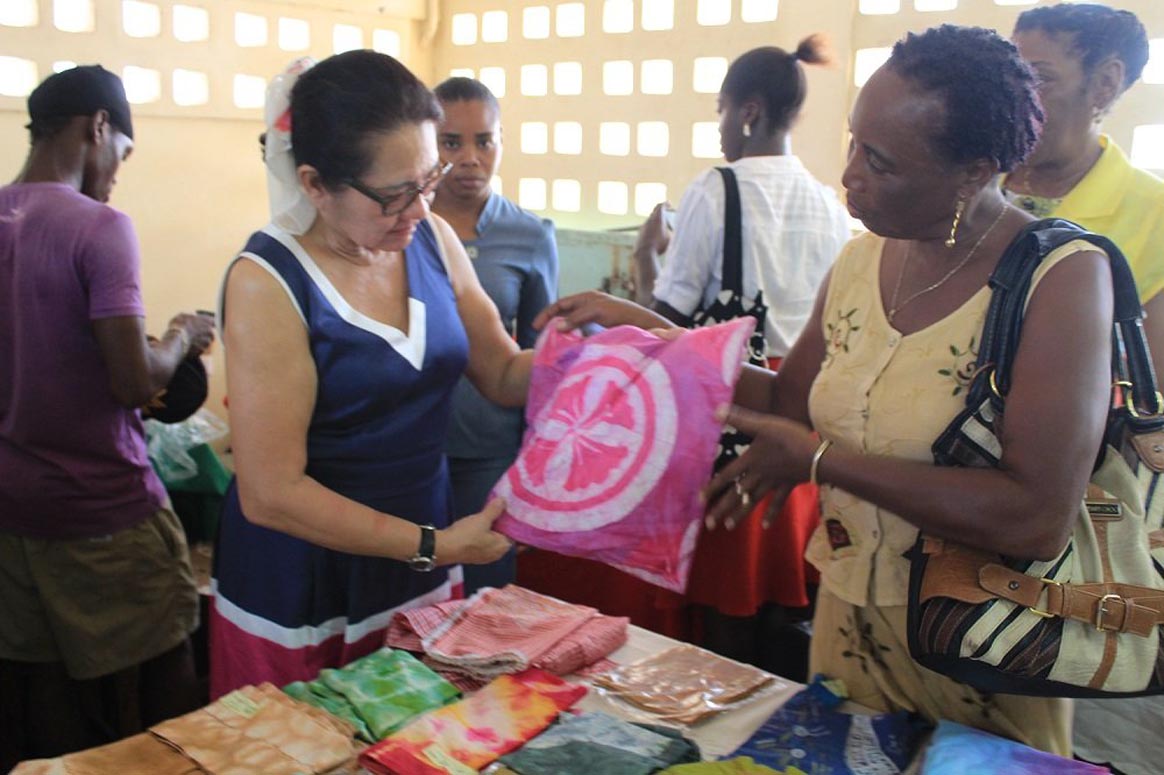 Georgetown, Guyana – (October 20, 2015) “I think this workshop today is very well received. It’s very important and I know the residents of Blueberry Hill do appreciate this very much. Blueberry Hill was like the lost city. Nobody ever remembered us.” These were the sentiments expressed by Cicely Montrose, who participated today in the “Self Reliance and Success in Business” workshop supported through the Office of the First Lady, Mrs. Sandra Granger.

The First Lady declared the workshop open, in the auditorium of the Blueberry Hill Secondary School, Wismar, Linden, making it the second community to benefit from this initiative. The first such workshop was held in Good Hope East Coast Demerara and engaged a total of fifteen persons. Today’s workshop registered twenty-one participants, even though the facilitators had initially catered for only fifteen.

Mrs. Granger, summing up her thoughts on the initiative, said the forum offers opportunities to the participants with the hope of them returning to their respective communities to educate others. “I’m hoping they can go back in their communities and train people in the importance of self-reliance and having a plan to succeed,” the First Lady explained.

First Lady Mrs. Sandra Granger taking a look at some of the handy work of Ms. Esther Benjamin, who operates the Linden Textile Arts. Her work was on display on the sidelines of the workshop.

Additionally, an important outcome the First Lady indicated that she would like to see coming out of these sessions, would be the formation of groups by participants to ensure a strong support network. This, Mrs. Granger said, is critical since it is common for persons to have business ideas but in most cases a structure is needed to ensure that an idea becomes a reality.

With regard to the response the initiative has received, the First Lady said persons are very open and receptive to education and the demand for such a programme in growing.

“It was something that people wanted and I had the resources and I’m very happy. I’m looking forward to taking it to other parts of the country,” Mrs. Granger said. She added that her mantra, going forward with this initiative, is “once women are successful and educated, they seek the same for their children and their home and communities.” However, while many women are grasping at the opportunity to participate, men too have come out to gain the “know how” for establishing sound business plans.

Montayne Solomon of Blueberry Hill, who participated in the workshop that was originally aimed at women said, “This has impacted us in many ways, because for some time now we have been seeking directives on the way forward. We need the opportunity to create businesses. Opportunities have been lacking in this community because of the unavailability of skills, finances and general know how. By the end of this workshop we should be in full grasp of the basics to make us better entrepreneurs.”

Another participant, Ms. Irene Bentick, also lauded the First Lady for choosing Region Ten, which she said has been starved of these types of opportunities. “I think this community will benefit a whole lot, because we have the opportunity now to get a better insight of how to do business,” Bentick said.

The workshop is being facilitated by Wayne Barrow of Interweave Solutions, which is a Non-Governmental Organisation that helps local organisations and congregations to develop and create self-reliance by providing them with the necessary training to implement and promote their own business plans. The next session for this workshop is scheduled for Thursday October 22, followed by Tuesday October 27 and the closing session will be held on Thursday, October 29.

The aim of these workshops is to empower women and teach them to manage and sustain their small entrepreneurial ventures. Over the coming days the participants will be guided through a model, which builds on the inter-relationship of three key life areas; Business, Home and Community.

As outlined by the facilitator, when the strengths of these three spheres come together, every circle is made stronger through Education, and people achieve the social and economic self-reliance essential to growth.

During the first session, Barrow explained how successful businesses bring jobs, prosperity and growth to homes and communities. Further in the coming days the participants will get better insight on how healthy communities provide an environment of security, solutions, services and a solid customer base that make it possible for businesses and families to succeed.