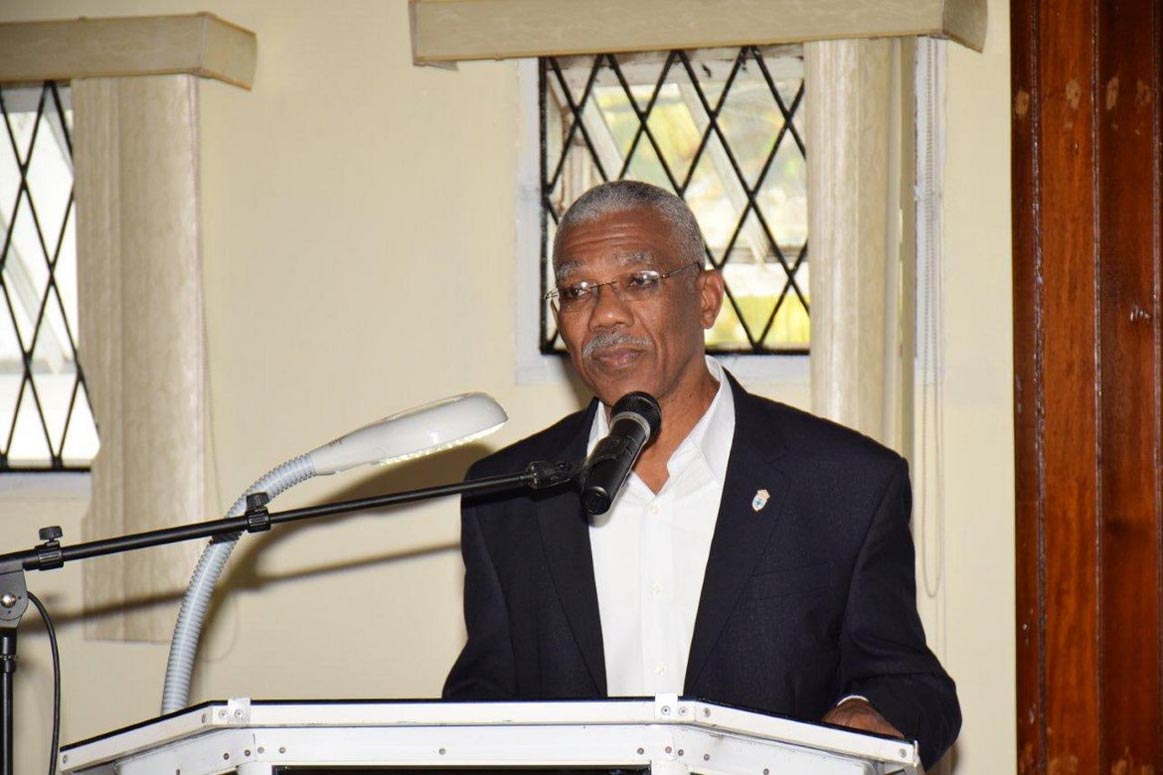 Georgetown, Guyana – (October 15, 2015) In light of continued territorial threats from both Venezuela and Suriname, President David Granger said, “…all the elements and instruments of national power need constantly to be employed in order to protect our territory.” The President made this statement when he met with Guyana Defence Force (GDF) Officers, at Camp Ayanganna, where he outlined the “Total National Defence” Policy, today.

During the closed meeting, the President said that in order for Guyana to face head on, the contrived controversies that have been invented by Venezuela and Suriname, a plan for ‘total national defence’ is necessary. This, he said, implies that all the elements and instruments of national power need constantly to be employed in order to protect the country’s territory.

The “Total National Defence” Policy stipulates that all the elements and instruments of national power be combined to protect Guyana’s territory. Upon implementation, it will also give regular and reserve forces the resources they need to perform their mission over the next five years. Significantly, the President instructed, that never again is the reserve force, to fall below the required 50 percent of the regular force strength.

President Granger said that the long-term objective is to ensure that Guyanese will be able to depend on defence forces which will ensure the safety of the citizens and the security of the country. He emphasised that the, “age of very visible warfare, in the form of harassment on our borders or the intrusion of gunboats into our waters is not yet over.”

As such, the new policy will place great focus on the re-organisation and strengthening of the GDF on five pillars; personnel, readiness, infrastructure, morale and equipment with emphasis on the Air Corps, the Coast Guard and the Engineer Corps.

“These changes must be designed to develop the Force’s capability to provide continuous surveillance over Guyana’s air, territorial and maritime borders and approaches, to provide search-and-rescue services to persons in distress and to provide assistance to the civil authority in response to any threat or disaster,” the Commander-in-Chief said.

The policy will see the re-establishment of the People’s Militia as a credible reserve in all ten regions and the National Cadet Corps to allow boys and girls between the ages of 12 and 18 years in secondary schools to pursue part-time training. Further, a Civil Defence Corps will be established to support the work of the Civil Defence Commission in responding to and managing disasters.

As it relates to the security challenges that Guyana faces, the President said that all instruments of national power must be employed in a more integrated way. He said that this would require a much higher degree of inter-agency co-operation than what obtains at present, to combine defence with diplomacy, economic development with law enforcement, and the civil authority with the defence force.

In the maintenance of public order, the President said that the GDF operate only in support of and alongside the Police on clear and carefully defined missions. However, the GDF should never be allowed to become part of the rural landscape since public order and everyday law enforcement remains primarily the task of the police.

Additionally, the President is of the view that Guyana’s defence diplomacy needs to be enhanced; noting that this can contribute to building confidence between armed forces and, in extreme cases, to preventing conflict, managing crises and resolving disputes between states.

Meanwhile, GDF Chief of Staff, Brigadier-General Mark Phillips called the new policy “timely”. He said that it will provide a framework for elected civilian officials and military officers to continuously review the roles and missions of the GDF.

“Your policy statements today, will allow for a more efficient focus of our resources, our training and our operational planning,” The Chief of Staff said.

Similar sentiments were expressed by Commanding Officer, Col. Patrick West who said that the new defence policy will allow the GDF to align its training and operational planning to achieve the national objectives.

US to support Guyana’s anti-narcotics efforts